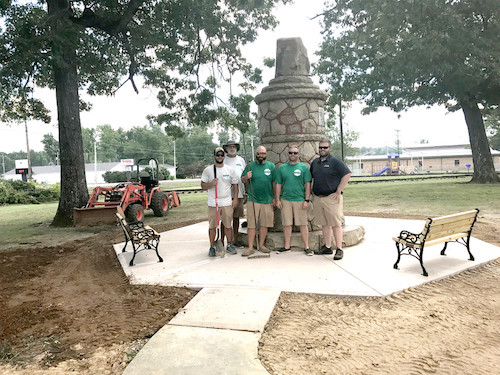 Revitalization work is continuing this month on a monument around the ancient stone in Monterey that once served as a boundary marker for American Indian tribes.

Putnam County did not get a $50,000 tourism enhancement grant it hoped for for the project, but County Parks and Recreation Director John Ross Albertson said that hasn’t put a halt to plans to improve the Standing Stone Monument.

“After we didn’t get the grant, we started a process of just doing what we could to help maintain it,” Albertson said. “We pressure washed it to help clean it off. Then, we have gone through and stained it and sealed it. All the cracks in the stone are stained red to represent the blood of the tribe. I think the color turned out perfect. It actually shows up well from the road now.”

A concrete pad that had surrounded the monument has been replaced.

“There was a small little ring of concrete around it that had been busted out and was cracked, so we went in and took that out,” Albertson said. “Now, we’ve poured a new concrete slab which is actually seven-sided to represent the seven tribes that the Cherokee nation had. We’ve also added some benches that used to sit at the Putnam County courthouse.”

Albertson said he has particularly enjoyed researching the history of the Cherokee clans and hopes to also plant some flowers and fauna that were common to the region when Native Americans lived here.

“We’re going to move into the second phase which is putting in a stone walkway and potentially a council house,” said Albertson. “We’re working on the planning of that, trying to determine costs and find contractors.  We’re going to try to work within our capital projects budget to pay for it.”

He said the ost has not yet been determined.

“We’re going to do it probably much cheaper than what we anticipated with the grant,” Albertson said. “We’re going to scale it back a little bit, but I still think it will turn out well.  We’ll have to see what our costs come in at. We’re at the point right now of trying to determine how to even lay out a seven-sided council house.”

He said the department will do as much as they can with the funds available, noting that a planned fire ring may not be completed immediately.

“We may end up having to break it up into phases, so it may take a little longer to phase in. Ideally, if we can afford to do the council house, we would hope to have it done before Standing Stone Day in October,” Albertson said.