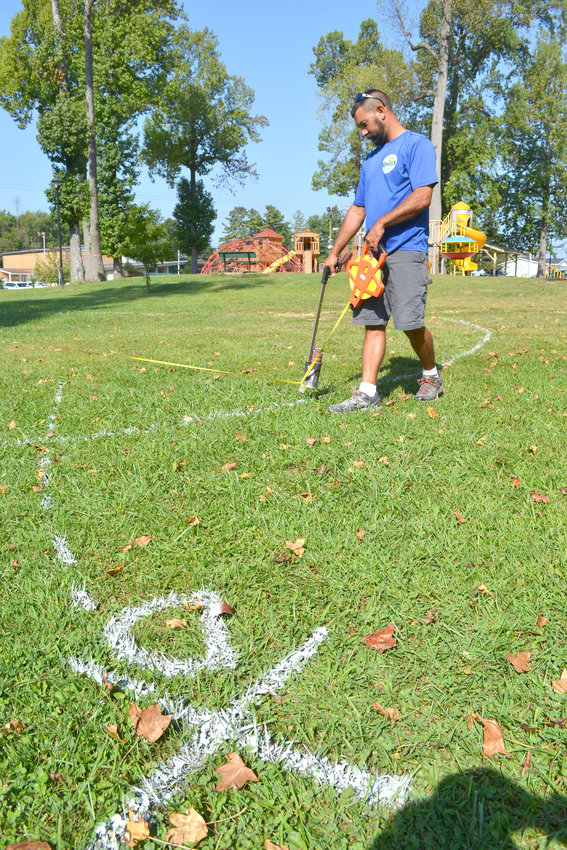 The construction of a water feature at Monterey’s Whittaker Park is moving forward.

A $20,000 grant from the Tennessee Department of Health is funding the work.

“We have actually just got the money transferred into our department from the state, so that is the first big step,” said Parks and Recreation Director John Ross Albertson, who took a crew to Monterey Wednesday to designate the specific location for the feature.

“We’re laying out where it’s going to be, marking the area,” he said. “We like to go in and paint it, so that we kind of have an outline as to what the shape is going to be.”

Albertson said the water feature will be fairly simple to install.

“Essentially, it’s a splash pad kit that you can order online,” he said. “It’s made up of 16 nozzles that shoot directly up. Of course, we can set them at different heights.”

He said the basic kit can also be expanded in the future.

“As the years go on, we can continue to add to this and make it something even bigger and nicer,” he said.

Albertson said county crews will handle most of the installation of the water feature, but the concrete work will be contracted out. He is still working to develop a timeline for construction.

“I like to try and pre-plan everything as to what steps we’re going to do in the process before we actually go do it,” he said. “That way, we’re not digging up all the ground and then having to wait two weeks for the contractor to be able to get there, or we’re having to wait to get the materials.”

Albertson said at least some of the work will be completed in the coming months.

“The ideal scenario would be that we would at least have it installed and have the concrete in before the winter,” he said. “I can’t say as to whether it would be fully operational because we wouldn’t want to put water into it and then have to drain it back out with the risk of freezing. Our main goal is to have it up and running by April at the latest.”

Once the installation is complete, the town of Monterey will supply the water that will be filtered and recirculated through a pump to feed the system.”It’s going to be a neat project for us,” Albertson said. “It’s the first time we’ve done a project like this, but this system is something that we can utilize in several places. We can install something very similar to this at both of our pools, so this is something we’re really interested in.”