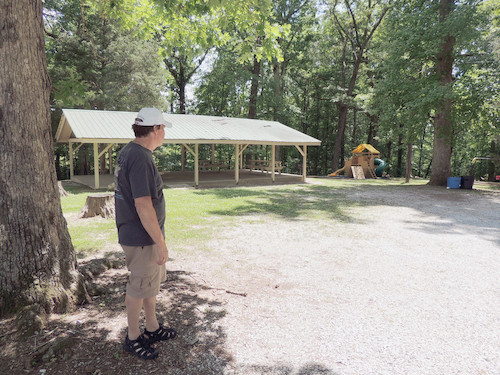 If you build it, they will come.

Baxter Mayor John Martin is anticipating that motto to come true with all of the development going on around the small city in western Putnam County.

“When I came into office, nothing was getting done,” he said. “Things were stagnant.”

Since he came in to office in 2016, things have been happening.

The replacement of Elmore Town Road bridge is being bid out after the city budgeted funds for that project, traffic issues are being aggressively addressed with regards to the area known as the Crossroads where Hwys. 56 and 70 intersect, infrastructure improvements are underway and a new park is being developed.

“We have capacity for growth with our sewers,” he said. “But there have been some issues we are addressing now.”

The main issue is water infiltration into the sewer system that happens on wet days.

“We’re going to do camera work to scope out the problems and figure out how to fix them,” he said. And the sewer plant will also need some work.

“We’re going to seek grant funds to do that,” he said.

The city also has applied for Community Development Block Grants to expand lines to Fixtur World’s new location and needed rehabilitation work. Officials won’t know if the city receives those funds until later this year.

Martin has been actively meeting with the Tennessee Department of Transportation to address the issue of traffic backlogs that the area frequently sees, especially notable during the school year.

“We’ve gone back and forth about what will be best out there,” Martin said. “The thing about signals is that once you have them, you have to maintain them.”

With TDOT engineers looking at the area, they said that a roundabout might be the best solution.

“There’s enough room for one,” Martin said. “It won’t take much work.”

With the intersection containing two state routes, Martin said the city would not be out any money.

“But we have to wait to see how the new gas tax plays out,” he said, so no timeline is available as of when it would be done — or how much it would cost the state.

“It will take some learning,” he said of a roundabout. “There will be educational seminars at the schools for the bus drivers and for others to be held at the visitors center.”

J. Cumby Construction’s president Justin Cumby’s mixed-use development of commercial in that area will also spur improvements to that area near the Dollar General Store.

“I’m excited about him bringing that development,” Martin said. “I can’t wait for him to start moving dirt.”

Work on Baxter Seminary Park, located between Cornerstone and Baxter Primary schools, is moving along.

“We’ve got the groundwork done and just need to sow the grass seed,” Martin said. “The walking trails are lined and ready for the next step.”

Those trails will combine with the current Baxter City Park, which has new playground equipment thanks to the Putnam County Health Department’s “Knock Tobacco out of the Park” initiative.

“John Ross Albertson with Putnam County Parks and Recreation is helping out a lot,” he said.

There will be a bridge connecting the Cornerstone School property to the park, taking people over a little stream that was a dump at one point in time.

“It was full of tires and other trash,” he said.

The staff at Cornerstone now are looking at building an outdoor classroom near the park.

“This will look really nice once it’s all done,” Martin said, adding that he is looking to build an ampitheater in the park as well.

Work on the empty space at Baxter Primary is underway to make space for the Baxter Senior Center, along with the library.

“This is a wonderful concept,” Martin said. “It’s all about bridging the generational gap.”

Once the renovation wraps up, then the members of the senior center can enjoy the new space.

“Hopefully they’ll move in the next month,” he said.

All of the security issues have been addressed, along with handicapped issues.

The library will take a bit longer to renovate, as there are some walls that need to be taken down.

“The county will help with that,” he said.

And when the library moves out, the city hall building is next on the renovation list.

“The police department will go where the library is while city court will be held in the back,” Martin said.