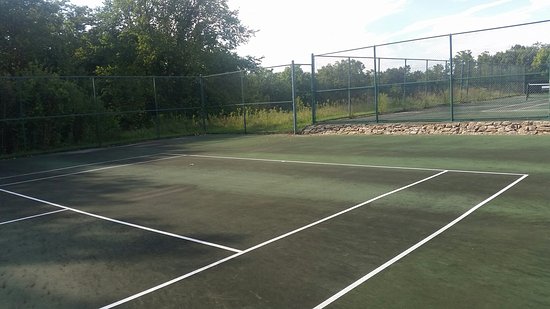 Repairs are being planned in the coming months for the six public tennis courts that Putnam County oversees at the Cookeville Community Center.

“We have substantial cracks in just about all of the courts,” said parks and recreation director John Ross Albertson. “They were resurfaced around six years ago. They weren’t completely redone. They were just repaired.”

He said the repairs did not last because an underlying problem wasn’t addressed.

“We’re looking at drainage,” he said. “The poor drainage situation is what has caused the cracks to be made even worse.”

Topography is part of the issue.

“We have a little hill that runs down right next to the tennis courts, and so all the rainwater runs off the hill and right underneath the courts,” Albertson said. “In the winter months what happens is the water gets in those cracks, and then it will freeze and expand and push the asphalt apart. We’re going to have work with an engineer to get drawings to implement some different drainage.”

He has proposed spending $70,000 out of the county’s capital projects fund next year to pay for the repairs. Additional funding may also come from other sources.

Improvements have also been made to the lights at the tennis courts.

“We’re on a new, fully-automated system to where we can turn them on and off from our cell phones. We can set schedules for the lights,” he said. “We’ve put it in place at the tennis courts, in Algood, and at our sports complex next to Cookeville High School. When I first got here, the lights would stay on sometimes all night because people would (forget to) turn them off. We’re trying to be better stewards of the way that we use electricity.”